She’s one of our processing associates who helps keep Egg Central Station clucking. Cassidy is a Springfield, MO native who joined the Vital Farms crew at the end of 2017. Cassidy herself grew up on a family farm and is currently studying animal sciences at Missouri State.

You’ve been with ECS from the beginning, what has that been like?

There’s been so much change! I used to be on the later shift, so even just the change of working days instead of nights has been a big switch. It’s been cool to see how we’ve grown and have new machines to work on.

What would you say keeps you motivated to work so hard?

That’s tough, but I’d say the future! I’m currently going to school, studying animal sciences, and I’d love to one day work with the small family farmers. I think it’d be my dream to work for the farmer support team and get to work side-by-side with the farmers every day.

Thank you, Cassidy for all you do!

In an effort to shine a spotlight on the people who make up Egg Central Station, we’re bringing you some of their stories in a series called The Faces of ECS.

Manage Cookie Consent
To provide the best experiences, we use technologies like cookies to store and/or access device information. Consenting to these technologies will allow us to process data such as browsing behavior or unique IDs on this site. Not consenting or withdrawing consent, may adversely affect certain features and functions.
Manage options Manage services Manage vendors Read more about these purposes
View preferences
{title} {title} {title} 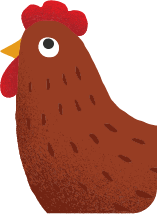 Sorry. This form is no longer available.

You can do this. Promise.

Hens Behind the lens

Thank you for your interest, we are no longer accepting entries for the Coffee Table Book Giveaway.

Welcome to
the FLock

Stay tuned for egg-citing news and updates. In the meantime, click below to find our products in your area.